The Golden Horde – Battle of Kulikovo 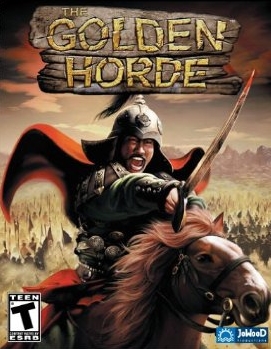 The symptoms of the decay of the Golden Horde, once a great and mighty state, had surfaced already during the first years after the death of khan Uzbek. In fact during the reign of Uzbek’s heir, Janibeg (1342-1357), the Golden Horde held its positions, but after the death of Jani Beg, it fell into an unseen before political chaos. There began the period of civil wars, during which, with the utmost cruelty, exterminated one another numerous legal and self-styled claimants for the khan’s throne, professional and accidental assassins, usurpers fishing in troubled political waters, and those, who in vain tried to put an end to the horrors of the political chaos. In those circumstances it became impossible to exercise the real control over vast territories, which among others contributed to Moscow’s growth in power and Lithuania’s incredible successes.

But it was still long before the complete collapse. Amidst all that chaos had emerged a strong and energetic person: Mamai, one of the highest military commander, often called a khan in the historical literature, although there is no irrefutable evidence that he had ever occupied the khan’s throne. Nevertheless, although not a formal ruler, Mamai exercised the actual power, or rather superpower – he decided about all the affairs of the Golden Horde for often changing khans, who were merely pawns on his political chess-board.

A skilful intriguer he was, Mamai promptly realised what danger the ever growing in power principality of Moscow posed to his rule. Especially the stronger it was, the lesser were the tributes from Russia. Mamai resolved to put the end to that process and restore The Horde’s domination over Russia in full, although not in the territorial sense – he had to reconcile with the thought that it was impossible to take back the lands lost in course of the struggle with Lithuania. After all the necessary and thorough preparations, Mamai with substantial forces struck in 1373 against Ryazan and ravaged its domain. Five years later he repeated the invasion, having literally desolated not only the principality of Ryazan, but also the principality of Nizhny Novgorod. But in his plans all that constituted only a prelude to the great shrift with Moscow. 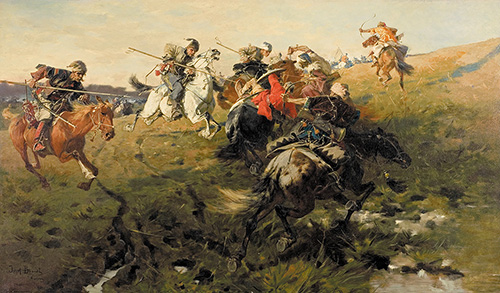 Mamai did not hurry the preparations. First of all he took care of allies. He found such in persons of Oleg, the duke of Ryazan, and Jogaila, the grand duke of Lithuania, and would be king of Poland (as Ladislas Jagiello). But both had disappointed him a lot. Oleg was an unbalanced ruler, who changed his loyalties to Moscow every few years. At that time he was in hostile terms with Moscow, but evaded active military actions. As to the Lithuanian army, it was not in hurry to join the decisive battle when the Russian bands clashed with the Tartars in so-called Kulikovo Fields – the plains near the confluence of Nepryadva and the upper Don. It was risky to fight – battle of Kulikovo Fields, quite far from Moscow, but the duke of Moscow, Dimitri, applied that tactics right in order to prevent the Tartars to join their allies.

The Battle of Kulikovo 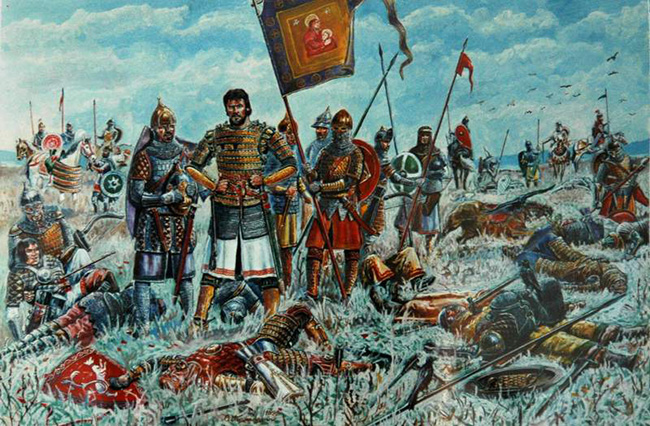 The Golden Horde – Battle of Kulikovo

An so, on 8 September 1380 the Kulikovo Fields became the witnesses of one of the greatest and bloodiest battles of the Middle Ages, and one of the most significant battles in the history of mankind. In the beginning of the battle the Tartars prevailed, and it seemed that their victory was sure, but once again the tactics decided about the outcome of the contest. Dimitry held substantial forces in ambush, and at the pivotal moment engaged fresh Russian reserves against the enemy exhausted in the bloody battle. The battle ended in total Tartars’ defeat; only few of them, including Mamai, fled for safety. The Kulikovo Battle has been forever noted in the History as one of the greatest Russian victories, whereas Dimitry gained the nickname Donskoy and was elevated to the sainthood. At the eve of the 140th anniversary of the Tartar-Mongolian invasion of Russia the Tartars suffered such a devastating defeat for the first time. Of course, it became yet another milestone in the process of decline of the Golden Horde, where struggle for power and fratricidal wars flared up with previous power.

For Russia the victory in  the Battle of Kulikovo became an important factor in the process of reunification, first of all in the sense of display of the national consciousness and manifestation of the unity of Russian lands. And that came regardless of the fact that some principalities (for example Novgorod, Tver, Smolensk or Nizhny Novgorod) did not support Dimitry The bigger was then the role of Moscow in the process of re-unification.

It is worth noticing that the military victory as such did not yet annihilate Russia’s dependency on the Tartars. The more so that soon after  the Battle of Kulikovo a new Tartar danger loomed over Russia, although this time not from Mamai. He survived the Kulikovo Battle only to be defeated several months later by the armies of the khan of the White Horde, Toqtamish.

the Battle of Kulikovo

The White Horde, in old Russian chronicles called the Blue Horde, was an eastern splinter of the empire of khan Batu. It spread between the Lake Aral and the Ishim (tributary river of Irtysh). Originally the power there was in hands of one of Batu’s brothers, who ruled as a governor, but soon the White Horde produced its own khans, formally dependent on the Golden Horde, but gradually loosing that dependence. In 1360’s the White Horde, whose capital was in Sygnak (on the Syrdaria), was at the peak of its prosperity under the rule of khan Urus. Urus tried to restore the former unity of the Golden Horde under his leadership, and even undertook some steps towards that objective, as he conquered some lands on the Volga with the capital of a local khan, Sarai Berke (New Sarai). But Urus did not complete his work – he died somewhere around 1377 (details are unknown). After a short turmoil in the White Horde a new ruler took the power – Toqtamish, the son of one of the nobles executed by Urus. Toqtamish was very energetic, but very impatient; in modern language – nervous. When Mamai, defeated on  the Battle of Kulikovo, withdrew into his domain to gather the army for a new expedition, Toqtamish attacked him and totally crushed in the battle on the River Kalka, exactly in the same place, which some hundred-fifty years before witnessed the bloody battle between the Mongols on one side and the Russo-Polovtsian army on the other. Mamai, now with just a handful of his bodyguards, fled again and found a refuge in Kaffa in the Crimea, but just within few days he was murdered there. At this point it is worth noticing that exact dates of the events are not known. Historians typically fit them in the year 1380, but in view of the fact that the Kulikovo Battle took place on 8 September, it is hardly possible that so many events took occurred within four months.

After the battle on the Kalka, Toqtamish of course became the khan of the Golden Horde. But it was not enough to him. Just like Urus, he wanted to restore the complete sovereignty over the Russian lands. Envoys were sent to Moscow with an appropriate demand, but to no avail. Then Toqtamish gathered a new army and with substantial forces besieged Moscow in 1381. Prince Dimitry left the city in time to gather more forces in the north. Despite of quite unexpected appearance of the Tartars at the gates of Moscow, Muscovites had delivered a stubborn defense and did not surrender until negotiators from Nizhny Novgorod solemnly swore in the name of the khan that the trouble would be settled by a ransom. In fact everything turned as it used to in numerous previous cases of the past century – in looting and pillaging, rapes, killings and destruction. The same fate was of other towns of the Grand Duchy of Moscow: Vladimir, Pereyaslavl Zalessky, Mozhaisk and Yuriev Polsky, while the Tartars took many captives back to the steppes. Dmitry Donskoy was forced to accept once again the sovereignty of the Golden Horde, but on the other hand till the end of his reign he remained in peace with it. 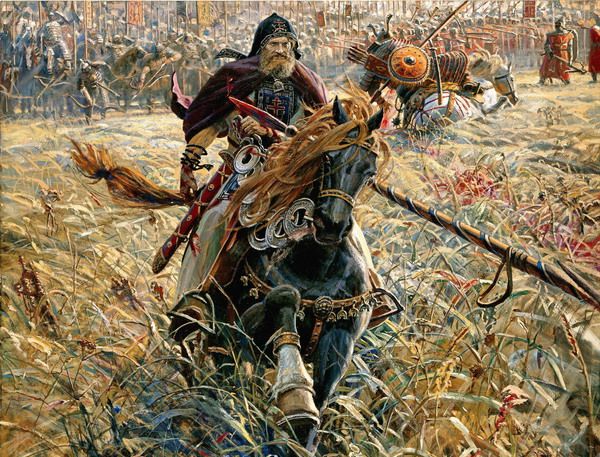 The Battle of Kulikovo

Meanwhile Toqtamish, contrary, still was lacking something for complete happiness, and it was a rather important thing. Political relations of that epoque greatness and dependency on someone else did not exclude each other, and that was exactly Toqtamysh’s situation. When he started his quest for the power in the White Horde, he enjoyed, and despite of initial setbacks kept enjoying till the victorious end the support of the would-be “conqueror of the world”, Tamerlane (Timur-i-Lang). Since 1370 Tamerlane had been the emir of Transoxiana (the region of the Central Asia between Amudaria and Syrdaria). On 10 April 1370 he received homage from all the warlords of the Central Asia. Their dependency on Tamerlane was rather a rudimentary legal formality of the past epoque, but nevertheless Toqtamish desired its annihilation whatever the price. But having risen against Tamerlane he had not expect that he had risen against a ruler way powerful than himself. As a matter of fact, Toqtamish stood several years of bloody wars and managed to find allies. Among them were Jogaila and his cousin, grand duke of Lithuania, Vytautas, but they did not bring Toqtamish good luck.

In 1395 Tamerlane crushed Toqtamish, and in pursuit after his scattered army ventured as far as Russia, where Tamerlane’s army ravaged Yelets in the south of the duchy of Ryazan. Yet although the way to Russia was open, Tamerlane turned his army back. His decision has been puzzling historians ever since – perhaps the military glory of Dmitry Donskoy played here a similar role to that of Alexander Nevsky earlier? For sure it is only known that the Lithuanian army arrived to the aid of Toqtamish soon enough to help him survive, despite of the defeat, on the shores of the Black Sea and in the Crimea. There he, with the usual energy, started preparations for a new expedition against the Golden Horde, which at that time already had a new khan. But the fate did not smile to Toqtamish. In 1398 his army was annihilated, and he himself fled to Vytautas, who at that time moved his court to Kiev. It seemed that not everything was lost – Vytautas was also preparing a military expedition against the Tartars, the greatest one Lithuania ever managed to launch, and an ally like Toqtamish was very useful to him. Of course, in case of success, Toqtamish was promised The Horde’s throne. 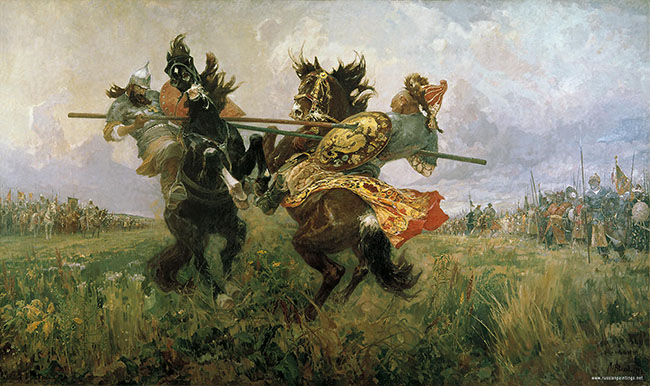 the Battle of Kulikovo

Yet instead of the greatest ever victory, Vytautas suffered his greatest ever defeat. His army, comprised of the Lithuanians, Poles, Teutons and Tartars, was annihilated in 1399 in the battle on the Vorskla (left tributary of the Dnieper, to the north of where is Poltava nowadays). After that Toqtamish lost whatever else was left to lose. He turned into a highway robber ransacking the steppes in search of a prey and fleeing the pursuit, but even that did not last long – in 1406 he was murdered.