Peter The Great: The Battle of Poltava 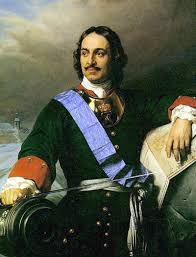 Peter The Great: Russian Battles from Narva to Poltava

The enmity that had existed between Russia and Sweden since the Viking’s time was intensified during the reign of Peter The Great and, finally, culminated with the twenty-year long Great Northern War. Russia had no ships on the Baltic and was struggling to gain entrance into the sea from Europe. With a fleet of 39 ships, Sweden dominated the Baltic. Under the power of the King Charles XII, Sweden fought to maintain its supremacy against Tsar Peter The Great’s forces.

In 1700 the exhausted army of Peter The Great was routed at Narva. Driven back from Swedish-held territory, Peter The Great was only briefly disappointed and quickly resumed the planning of fresh military campaigns. When Charles XII, meanwhile encouraged by his successes, sent an invading army into Poland. Peter I and his advisors were convinced that a Swedish naval attack was imminent.

In May 1701 a Swedish force of seven ships, armed with a total of 127 cannon, left Sweden and proceeded toward the White Sea. Under the command of Commodore Karl Lewe, the flotilla had orders to occupy and destroy the port of Arkhangelsk, thus preventing Peter The Great from receiving shipments of supplies or armaments from Europe through Russia’s single seaport. The ships reached the estuary of the Severnaya Dvina by the end of June. Lewe dispatched three ships to make a reconnaissance of the area and to impress into service local helmsmen who were competent to guide the Swedish ships. Late one night two of the local pilots taken captive, Ivan Sedunov and Dmitry Popov, risked their lives and infuriated the Swedes by deliberately directing two of the Swedish vessels into shallow waters. The ships went aground in a shoal quite close to the Russian-held fortress of Novodvinsk. Since there is very little darkness in the far North during the month of June the enemy ships were at once sighted and fired upon by the garrison of Novodvinsk. When the captain of one of the Swedish vessels was hit and mortally wounded during the consequent cannonade, seamen from the two grounded vessels scurried aboard the single still seaworthy Swedish vessel. The Mjohunden and the Falken, with thirteen guns between them, thus fell into Russian hands.

The victory at the Dvina estuary saved Arkhangelsk; its port continued to be Russia’s sole link to northern Europe by sea. Lewe, despondent over his loss, returned to Sweden.

In 1702 the Russian fleet celebrated yet another victory. Russian soldiers in lodjas attacked superior-armed Swedish squadrons on Lakes Chudskoye and Ladoga and took total possession of Lake Ladoga. Encouraged by his successes, Field Marshal Boris Sheremetev launched new offensives, taking the fortresses of Oreshek and Kanzi. On the night of May 7th, Captain Pyotr Mikhailov and Lieutenant Alexander Menshikov (in reality Tsar Peter The Great and his close friend and advisor Alexander Menshikov) successfully attacked and captured the Swedish snow Astrild and the galliot Gedan, which had entered the mouth of the Neva River.

Following the battle, all participating officers and soldiers were awarded medals bearing the inscription: “The unprecedented has happened”. The first Russian military order was thereupon created, the Order of St. Andrew the Summoned, and Peter The Great and Menshikov became its first recipients.

An important date in Russian history is  May 16th 1703, the day on which Peter The Great decreed the founding of the Saint Petersburg fortress on Zayachy (Hare) Island at the mouth of the Neva. 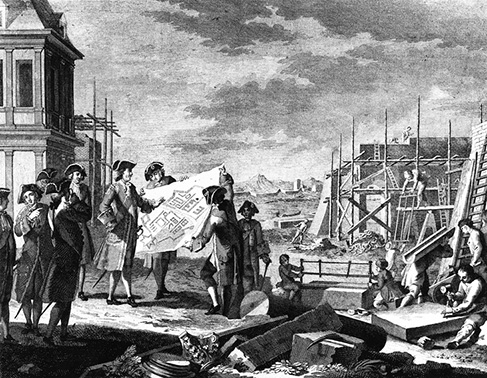 In order further to protect the sea approaches to the new fortress, Fort Kronshlot was also erected off Kotlin Island in the Gulf of Finland. In the winter of the following year on the left bank of the Neva, almost opposite Zayachy Island, a new admiralty was founded, that is, a shipyard for constructing vessels destined to constitute the new Baltic fleet.

The Russian Navy was largely successful throughout the Northern War. In 1704 Narva was retaken, and the batteries of Kronstadt repelled a Swedish attempt to approach Saint Petersburg from the sea. In the summer of the following year the Russian fleet, commanded by Vice-Admiral Kornely Kruys, became engaged in a battle off Kotlin Island against a Swedish squadron under Admiral Anckarstjerna. The battle lasted several days on the open sea, and, although the odds greatly favoured the Swedes, the Russian line was supported by the batteries at Kronstadt and Kotlin. The Swedes attempted to return the Russians fire and land troops, but both efforts ended in failure. Having suffered casualties of 114 wounded and 560 killed and captured, the remaining Swedish force retreated.

In the frigid autumn of 1706 the Russian army marched on Vyborg. During the campaign Guards-Sergeant Mikhail Shchepotyev commanded a group of five boats which encountered the Swedish 4-gun ship Esper in the night fog. Under cover of darkness the Russians rushed aboard the enemy ship and, after brutal hand to hand combat, took control of the boat and fended off another Swedish ship which came to aid the Esper. In spite of the small victories of Russian soldiers and officers, Vyborg remained in Swedish hands.

For the next two years the Swedes displayed no noticeable activity in the Baltic. The war’s outcome was being decided far from sea in the struggle between the armies of Peter The Great and Charles XII, and in 1709 the first phase of the Northern War ended with Russia’s victory at Poltava. 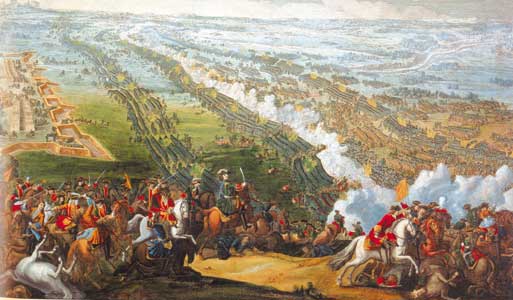 Russian Battle from Narva to Poltava

The Battle of Poltava. The Famous victory of Peter The Great

On June 27th, 1709 one of the famous events in the World History took place – The Battle of Poltava. Russian military headed by Peter The Great won a brilliant victory over the Swedish army headed by Karl the XII-th. The victory at The Battle of Poltava predetermined the outcome of the North war (1700-1721) waged by Russia against Sweden for the outlet into the Baltic sea and returning the Russian lands in Pre-Baltic region captured by Sweden. In the course of the North war the Swedish King Karl XII commenced the campaign against Moscow. Having met the stubborn resistance at Smolensk he turned his troops to the Ukraine. The Ukrainian people rose to fight against invaders. When the enemy approached the population of towns and villages annihilated foodstuffs, burned the dwellings down and left for the forests under the protection of the Russian troops. Detachments of the regular army and partisans were the enemy forces down in skirmishes. Karl XII attempted to capture the fortress of Poltava trying to replenish here their exhausted food supplies and, mainly, to use convenient geographical position of the fortress for the communication with their allies – the Turkish sultan and the Crimean khan.

The Russian command, taking into account the important strategic position of Poltava, sent there in due time six infantry battalions commanded by colonel A.S. Kelin. The fortress was fortified with additional ramparts, wooden paling, bastions…

Due to courage and staunchness of the Russian soldiers and inhabitants of the town this “wretched”, as Karl XII called it, fortress withstood almost three months long siege of the famous Swedish army. At Poltava`s walls the invaders lost nearly six thousand soldiers and officers and this considerably weakened their forces.

During the siege of the Battle of Poltava, Russian troops were ready for the decisive battle. Peter The Great`s I army crossed the Vorskla river to the right bank where the fortified camp had been built. The system of earthen fortifications was built at Poltava: redoubts which played an important role in repulsing enemy`s attacks during the first stage of the battle. For the first time in the history of Russian military separate closed earthen fortifications were used. Such fortifications appeared in armies of Western Europe only 80 years later.

At dawn on June 27th Swedish infantry and cavalry began their offensive. The enemy was hit by aimed rifle and artillery fire. Chased by Russians the regiments of enemy`s cavalry were defeated utterly. 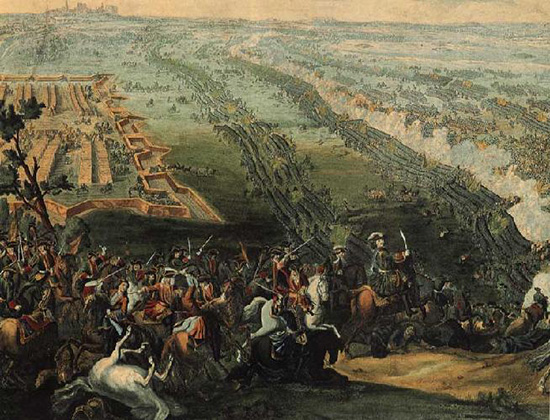 Peter The Great ordered to withdraw the cavalry from the redoubts to the fortified camp where the main part of the Russian army-infantry and artillery were concentrated.

The Swedes mistook this withdrawal for the retreat and followed the Russian cavalry. But unexpectedly they found themselves under devastating fire of Russian artillery. Having suffered great losses the disorganized regiments retread.

A three hours interval in the battle ensued at 6 o’clock in the morning on June 27th. The second crucial stage of the decisive battle began, it lasted about two hours. Karl XII attempted to strike a decisive blow into the centre but he failed to do it. No later than in half an hour the Swedes wavered. Russian infantry and cavalry began to press the enemy`s regiments. Soon their retreat turned into a panic flight. 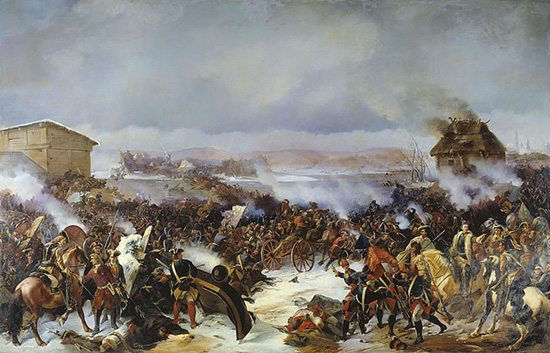