Lieutenant-General Mikhail Kalashnikov was a Russian general, inventor, military engineer, writer and small arms designer. He is most famous for developing the AK-47 assault rifle and its improvements, AKM and AK-74, as well as the PK machine gun.

The Kalashnikov rifle needs no introduction. In the following documentary  video we will show you its origins, how it’s made and tested, who uses it, and much more. You’ll be taken to the Izhmash manufacturing plant where the rifles are assembled, see elite soldiers from Russia’s Interior Ministry train with the world-renowned weapon, and hear American war veterans recall their experiences with the gun.

Kalashnikov was, according to himself, a self-taught tinkerer who combined innate mechanical skills with the study of weaponry to design arms that achieved battlefield ubiquity. Even though Kalashnikov felt sorrow at the weapons’ uncontrolled distribution, he took pride in his inventions and in their reputation for reliability, emphasizing that his rifle is “a weapon of defense” and “not a weapon for offense”. 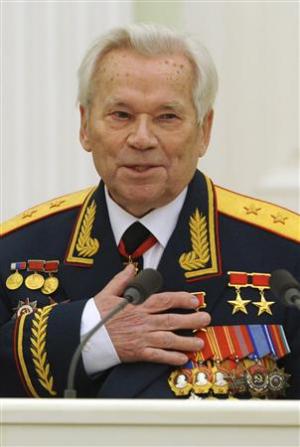 Mikhail Kalashnikov, the Russian inventor of the globally popular AK-47 assault rifle, gestures while meeting with Russia’s President Dmitry Medvedev during festivities to celebrate his 90th birthday at the Kremlin in Moscow on November 10, 2009.

Kalashnikov designed about 150 models of small weapons. The most famous of them are: