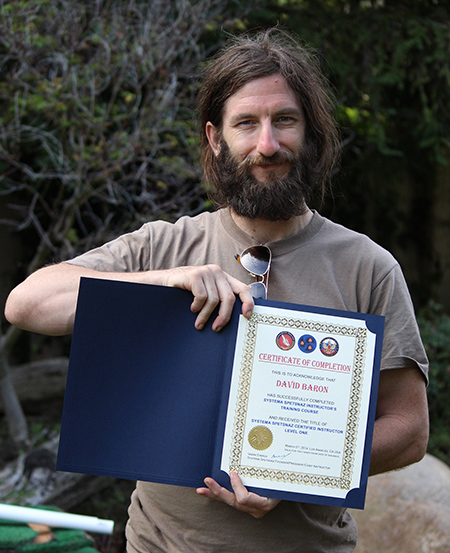 I began my Martial Arts training formally as a fencer in my early teens. I wrestled quite often when I was younger often against larger opponents and both of these things started my base for martial arts training.

In my early twenties I started Hap Ki Do. I studied very intensely  until  I re-injured my knee in Hap Ki Do from a bike accident years ago.  I then found a Tai Chi studio and began practice to heal my knee. Our instructor mixed martial arts with the Tai Chi and I missed martial arts. I liked the “self defense class” which included a mash up of traditional Karate, traditional Jui Jitsu , Aikido, Judo. I began taking his karate as well which is blended with a push hands style boxing with Chi Gong otherwise called Fajin and different then Chinese Ch Gong. This has many of the same elements as Wing Chung.

I also discovered Aikido and studied at a number of different studios. My style reflects many principles of Aikido and the skills from it are very useful with Systema. It has been over twenty years since I started Hap Ki Do and along the way have had many teachers some just for one class or a few classes. Systema has been like a cement or glue that connects all the martial arts I have practiced.

In Russian Systema I started with just a few classes in Burbank before I found Martin Wheeler who teaches another school of Systema. Some of these techniques are more useful in urban situations including ballistic striking and very relaxed movement with correct breathing.

Systema Russian Spetsnaz,  taught by Captain Vadim Starov, is directly a military style and technique including battlefield and police as well as hand to hand, and weapons. I also include urban techniques in classes and mix in other martial arts I have studied. Others I have not mentioned include BJJ, Silat, traditional Jiu Jitsu, several styles of Kung fu , including Kung Fu San Soo and several karate styles.

I also have completed teacher accreditation at the Bikram School of India. I include breathing exercises that are Slavic as well as yogic. Visualization and energetic exercises to help realize human potential are also included.

I enjoy teaching and sharing what I have learned with others. I hope to train with you soon!